Thoughts and pictures about cooking, eating, reading, writing, and living.

Three summers ago, I read an essay for a class that met in the woods. The class was Wilderness Literature, a fantastic and low-key course offered at Penn State, and the essay was “Living Like Weasels” by Annie Dillard. If you haven’t read Annie Dillard, run to the bookstore. She cuts closely to her subject, trimming away the fat and vanity and nonsense that makes most writing unreadable. She starts slowly, usually observing a small event in nature. Then she climbs and climbs (you can hear the clacking of your car on the roller coaster’s track) before plunging into some ecstatic conclusion. Here “Weasels” whirls at its near-end:

“The thing is to stalk your calling in a certain skilled and supple way, to locate the most tender and live spot and plug into that pulse. This is yielding, not fighting. A weasel doesn’t ‘attack’ anything; a weasel lives as he’s meant to, yielding at every moment to the perfect freedom of single necessity. I think it would be well, and proper, and obedient, and pure, to grasp your one necessity and not let it go, to dangle from it limp wherever it takes you.”

Two years later I bought a book of her essays, “Teaching a Stone to Talk.” The most memorable piece, “Total Eclipse,” saw Dillard see a full solar eclipse in the Pacific Northwest. As the moon blocks out the sun and the day darkens, culture evaporates, and Dillard feels as if she’s on the Euphrates and civilization is beginning. It absorbs you. At times you feel that Dillard’s so skilled she oversteps language and directly communicates raw units of information that have not been translated into words.

In 1974, before any of these essays, Dillard wrote “Pilgrim at Tinker Creek.” It won a Pullitzer. She was 29. 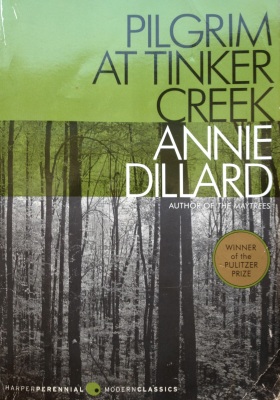 I am reading the book now. It is a 20th-century Walden; having fled to the woods, the author lives a simple life and gives simple advice for living. Unlike Thoreau, Dillard at times veers far into the abstract. Here, when she loses me, I focus on the language and how it moves, knowing that the half-abstract and concrete stuff will be golden:

“Peeping through my keyhole I see within the range of only about thirty percent of the light that comes from the sun; the rest is infrared and some little ultraviolet, perfectly apparent to many animals, but invisible to me. A nightmare network of ganglia, charged and firing without my knowledge, cuts and splices what I do see, editing it for my brain. Donald E. Carr points out that the sense impressions of one-celled animals are not edited for the brain: ‘This is philosophically interesting in a rather mournful way, since it means that only the simplest animals perceive the universe as it is.'”

She writes about blind people with cataracts, who, having gotten a once-new surgery, saw for the first time. These people saw the world as “color-patches” and could not understand size or depth or, like the baby playing peek-a-boo, the idea that when it object goes out of sight it can still exist. Always, you hear the clacking. You know Dillard’s small, cutting observations are whirling to some grand idea. Looking around on the climb up can be just as enjoyable as free-falling down the breathless drops.

Tone endears readers to writing, and Thoreau strikes the most pleasant tone of any writer I’ve read. In his essay “A Winter Walk,” he marvels at winter in a time before gas heating and electric refrigeration:

“We sleep, and at length awake to the still reality of a winter morning. The snow lies warm as cotton or down upon the window-sill; the broadened sash and frosted panes admit a dim and private light, which enhances the snug cheer within. The stillness of the morning is impressive. The floor creaks under our feet as we move toward the window to look abroad through some clear space over the fields.”

From the fireside you can see the snowy yard. There is HDT, standing next to you, and you’re having a one-sided conversation. Though he can speak Latin and Greek, Thoreau never talks down to you. His humility and optimism and love for the natural world make him likable, and for his charm we are likely to listen to his ideas when the vector of his story makes an unforeseen turn into philosophy. But his simple observation will do, especially when the flurries fall and he profiles, exactly, the cozy character of winter.